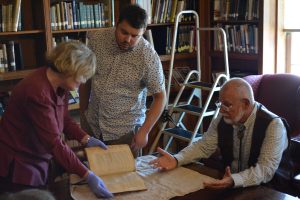 N.C. Maritime Museum Collections Manager Lynn Anderson, left, and Curator David Bennett, center, look over the original 1776 edition of ‘An Universal Dictionary of the Marine’ donated Wednesday to the museum by Robert and Linda Stedje-Larsen of Wingate. The book had been in Robert Stedje-Larsen’s family for more than a century. 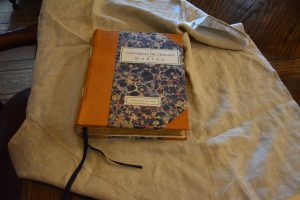 BEAUFORT, N.C. — When Robert Stedje-Larsen looked up the value of a book that had been in his family for over a century, he came across the title being sold for around $90.

But what he didn’t realize at the time was that those prices were for copies and not the 1776 edition of “An Universal Dictionary of the Marine” by William Falconer that he owned.

Stedje-Larsen later came to learn that the book that by then rested in a box in his closet was an original printing of the rare and valuable second edition of Falconer’s work. And this week Stedje-Larsen and his wife Ann Stedje Larsen, of Wingate, and son Eric Stedje-Larsen of Virginia Beach, traveled to Beaufort to donate the book to the N.C. Maritime Museum in Beaufort. It will go into the museum’s library as part of its rare book collection.

Robert Stedje-Larsen said the book had been in the possession of his mother’s family when they came over from Lyngør, Norway, in 1904. Stedje-Larsen eventually received it from his father, who got it sometime in the 1960s. It was within the last decade that Stedje-Larsen learned more about its value and took it to a book appraisal fair at UNC-Charlotte.

“I had the expert look at it, and he said, ‘This is worth fixing,’” Stedje-Larsen said.

It was another eight years before he did anything more. At that time, he started worrying the book was breaking down and thought he ought to do something to preserve it. So he reached out to Jim Williams, whose card he had saved from the book appraisal, and brought the book to him this past fall.

But the founder of the book collection at UNCC suggested otherwise based on its importance and rarity, and Williams decided to take on the project.

Williams received the book last fall. For the restoration and stabilization, he had to scrape off the old glue on the back of the paper, restore the pages, put them together, sew them and then bind the book.

“It’s taken me until now to get it done,” he said.

Hand-marbled paper from Spain, Nigerian goat leather and Japanese tissue helped repair the book that came from Norway and will now be housed in Beaufort.

N.C. Maritime Museum Collections Manager Lynn Anderson said it will be part of the museum’s rare book collection, which is not accessible to the general public.

“We want to minimize the handling of this 200-year-old book,” Anderson said.

However, she added, she will work with the exhibits department on opportunities to put it on public display within the current gallery.

“We also plan to pick up a modern facsimile to have in our library for research,” she said. “ … It is an important resource to use in researching 18th century maritime terms in English and French.”

“I think it will be a jewel in our rare book collection.”