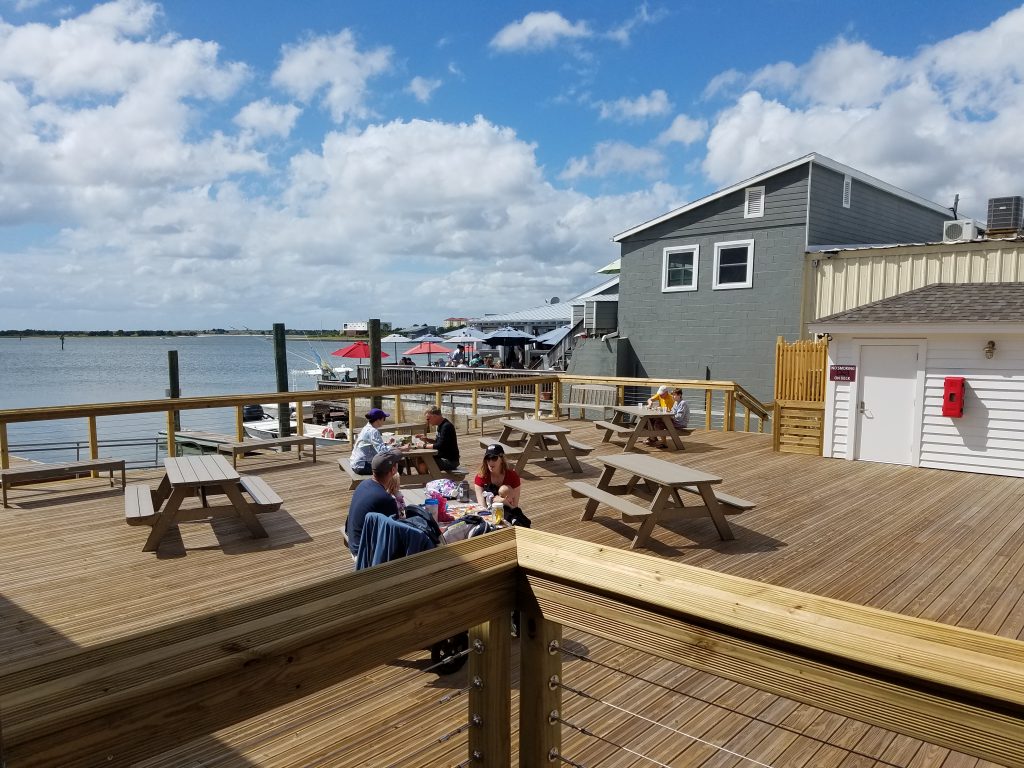 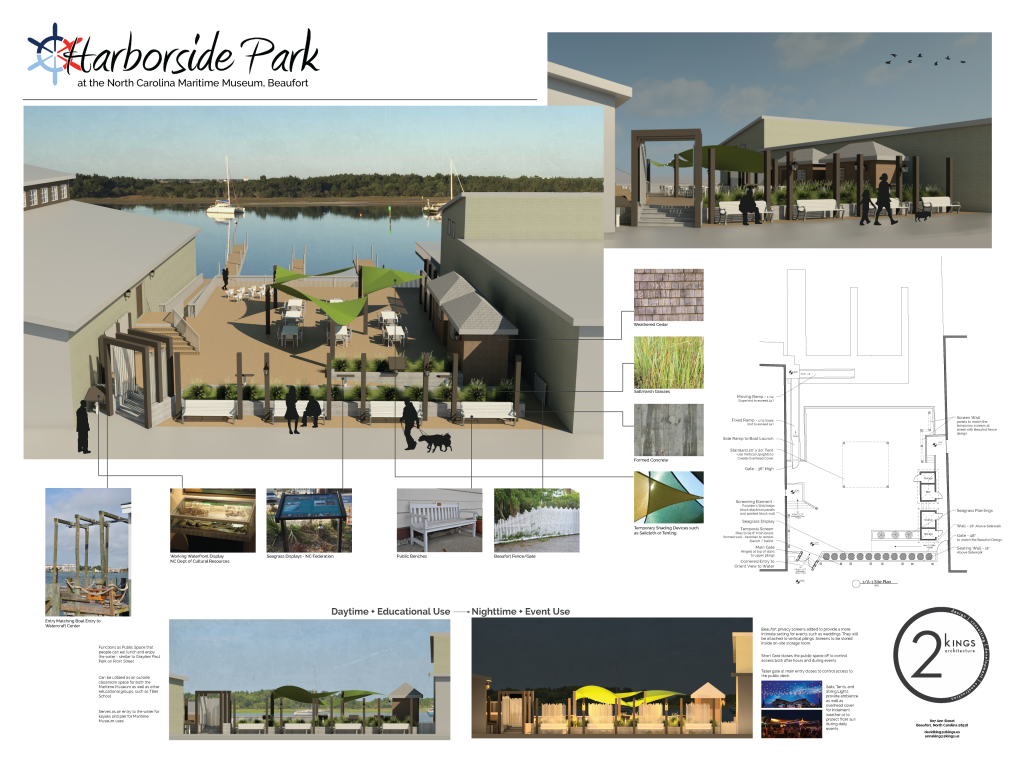 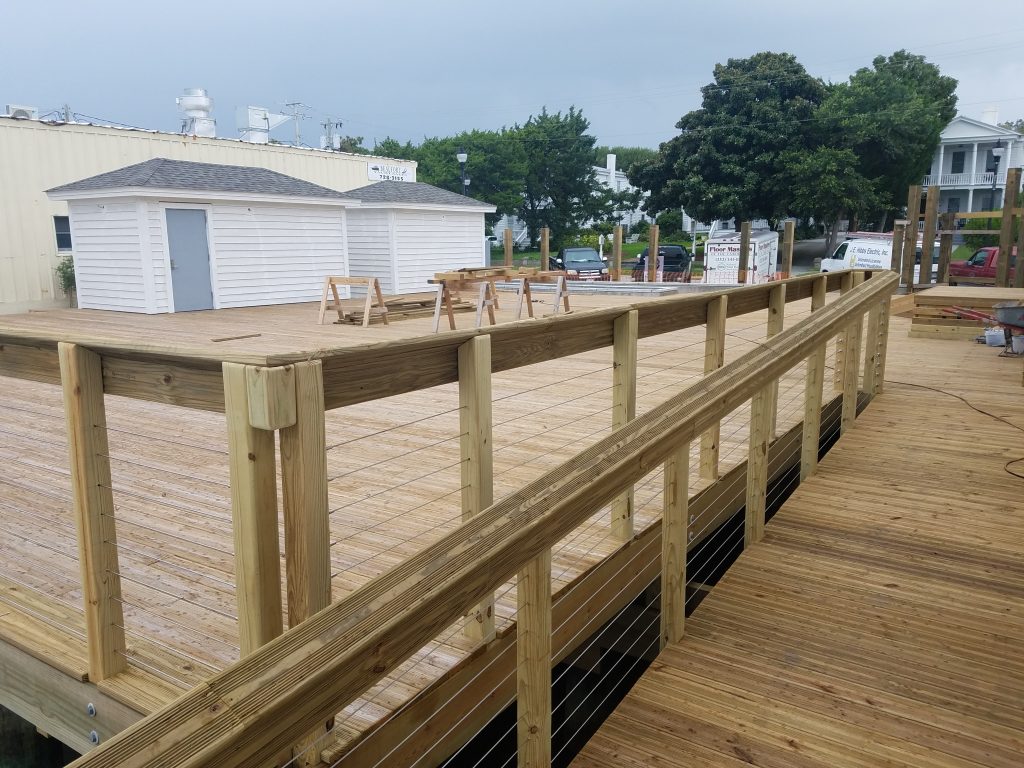 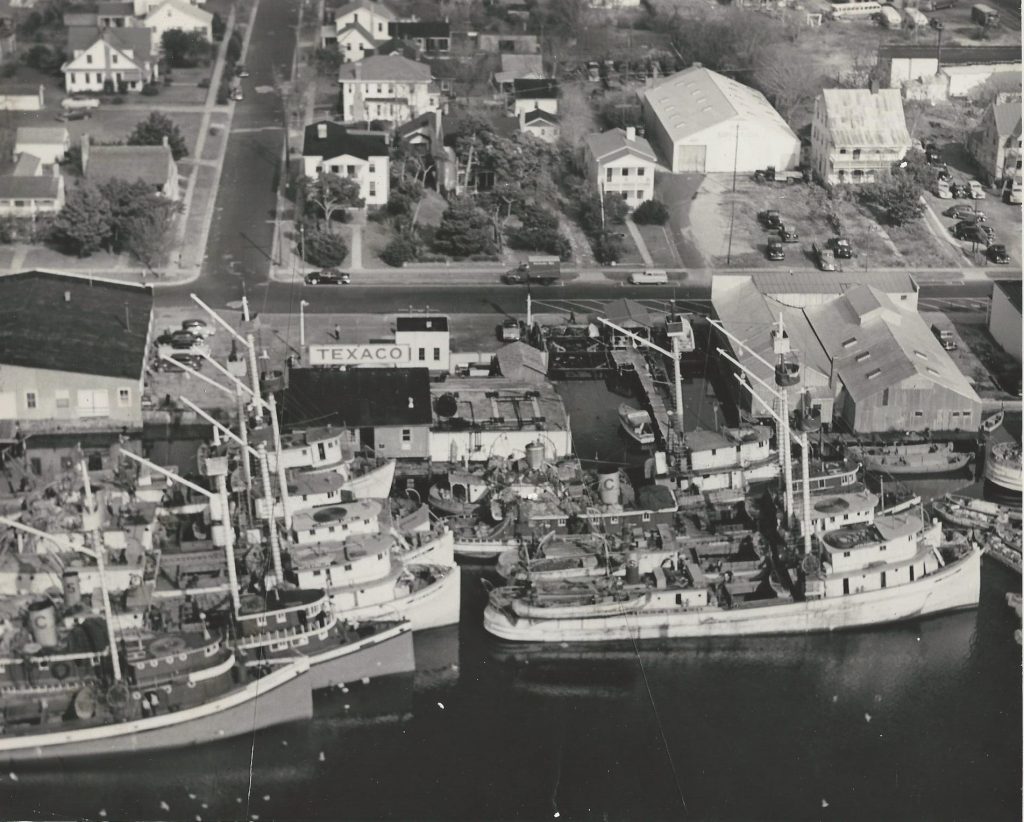 Harborside Park is a privately financed project to preserve a piece of Beaufort waterfront property for public use, an over-the-water park where the community can gather, enjoy and call its own.

We have completed installation on a beautiful downtown deck space overlooking Taylor Creek.

The site offers a place to sit, to relax and to reflect. It provides a maritime and eco-educational platform for both the North Carolina Maritime Museum and Rachel Carson Preserve to launch and house classes and projects. And it serves as both a public and museum event area.

But we still have a wish list for the property — to include additional seating and sun shades — that only with your donations can we make happen! Fill out the form for information on the project or to learn how you can help.

Tell me more about Harborside

The Harborside Services Building was constructed by Dr. Roscoe Mason in the early 1980s as retail spaces (first floor) and an inn (second and third floors). There were roughly four boat slips associated with the building, and a large upper and lower deck area were eventually adapted for use as an outdoor restaurant and bar.

The building was purchased in 1988 by Friends of the Museum, Inc. with $100,000 in donations and by taking on a $350,000 mortgage. The first floor was converted into a conventional classroom, a wet lab classroom, and a darkroom (primarily to support the dolphin identification program under our Cape Lookout Studies Program).

The second floor was converted to four office spaces (Maritime Curator, Cape Lookout Studies Program Curator, CLSP interns, Friends of the Museum) and a conference room for the Friends of the Museum Board. The massive deck area was used for many purposes, including display space for small watercraft, a staging area for all Museum waterborne activities, fishing classes, touchtables for school groups to see and touch live organisms, the annual Strange Seafood Exhibition, and the annual Traditional Wooden Boat Show demonstrations.

In 1992, the new Watercraft Center opened. The design was dependent upon the handicap ramp system, public restrooms, classrooms, deck and dock space provided by the Harborside building. The Museum’s waterfront setting was now comprised of an interdependent two-building complex.

A violent Winter storm in 1993, carrying sustained winds of 90 miles per hour for a period of 20 hours, ripped the roof off of the Harborside building. Soon thereafter, the docks were declared unsafe for the large number of participants as the supporting pilings have been diminished from years of exposure to the marine elements.

Then, the Department of Insurance insisted that the third floor be completely evacuated and sealed off from any use. Engineers from the Offices of State Construction further examined the building, and mandated that the second floor should also be evacuated, as the load-bearing capacity could not be determined with any accuracy. In 1995, we were told that the building could not be economically brought up to State Code as a public use building and the building was vacated. The building was torn down in the period from November 1996 through late Winter 1997.

The Harborside building was not a stand-alone structure, but an integral part of the Museum complex. State building codes for public buildings required ramps and public restrooms for the Watercraft Center. These are provided in the adjacent Harborside building, which allowed us to dedicate more valuable space to boatbuilding activities.