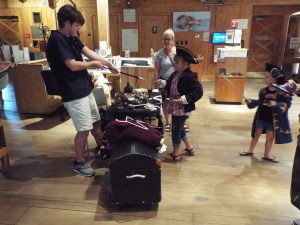 The Beaufort Pirate Invasion will be taking over more than the downtown streets again this year.

The N.C. Maritime Museum will host special activities that coincide with the annual event, which officially starts Friday evening and continues through Sunday. The museum, located at 315 Front St. in downtown Beaufort, will kick off the fun a little early, hosting a pirate movie, face painting, pirate discovery table and more throughout the day Friday and Saturday.

There will be three free showings of Disney’s Treasure Island (rated PG), which tells the story of young Jim Hawkins and Long John Silver. Attendees are welcome to bring refreshments for the movie showings, which will be at noon, 3 p.m. and 6 p.m. on Friday, Aug. 9.

The museum will also be handing out “Most Wanted” cards. Those who complete the scavenger hunt by finding a certain number of famous pirates depicted on the sheet will receive a prize from the museum treasure chest.

Other special activities — which will be held during the museum’s regular hours, 9 a.m. to 5 p.m. on Friday and 10 a.m. to 5 p.m. Saturday — include free paper pirate hats, as well as face painting.

Volunteer Michael Aman will set up his pirate discovery table in the museum lobby both days. His interactive display includes replica weaponry, sample artifacts and costumes that can be tried on for pictures. Aman will also share his vast knowledge about piracy in general and some of the state’s most famous scallywags.

A conservator will also be on site in the Blackbeard Queen Anne’s Revenge Exhibit both days, working on artifacts from the ship and explaining the conservation process.