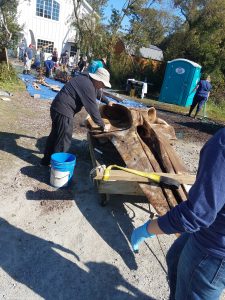 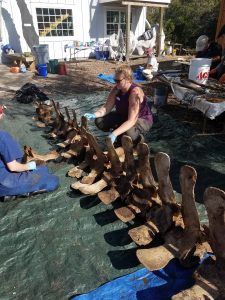 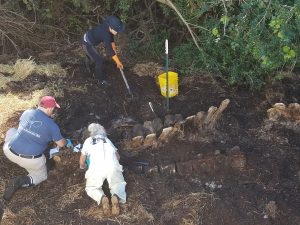 BEAUFORT, N.C. — A rare, endangered whale that is destined to serve as the holotype for what may be a new species is on its way to the Smithsonian Institution thanks to the work of a team at Bonehenge Whale Center.

The 38-foot Bryde’s (pronounced BROO-dus) whale was buried in May in a compost pit at Bonehenge Whale Center, located adjacent to the N.C. Maritime Museum in Beaufort’s Gallants Channel Annex, to remove remaining flesh and other biological materials from its bones. A team of about 15 exhumed the whale on Wednesday and readied it for transport to Washington D.C. where it will go into the Smithsonian’s cetacean collection to be used by researchers worldwide.

“This was a first in many ways,” said Keith Rittmaster, who runs Bonehenge as part of his duties as the museum’s natural science curator. He noted that the whale was the biggest he has worked on (it’s a few feet longer than Echo, the juvenile sperm whale that hangs in the museum gallery). It was the first time he’d used composting to process a skeletal set. The whale itself was among the most endangered on the planet, coming from a Gulf of Mexico population of only 33 remaining. And it’s likely a new species (or subspecies) altogether.

“We’re on the edge of science here,” Rittmaster said. “I’m honored to be a part of this.”

The group worked in teams of two or three dedicated to specific tasks and to specific portions of the whale’s anatomy: pectoral fins, for example, or ribs or vertebrae. When those sections — or bones from those sections — were recovered from the pit, the respective team would go to work cleaning the bone of any remaining material.

The work was done under the direction of John Ososky, collections manager for the Smithsonian. He had a simple way of introducing himself to the team.

“I’m the Ahab of the group,” he said, referring to the infamous captain in the novel Moby Dick. “That’s my whale.”

Ososky had asked for Rittmaster’s assistance with readying the carcass, which was found washed up along the Florida coast in January. The whale was emaciated, with a shard of plastic embedded in its stomach, which researchers surmise caused it to starve to death, according to Ososky. Once at the Smithsonian, the whale will not go on display but instead be used strictly for research and curation.

“It’s a fairly important whale,” said Ososky, noting that as the holotype it will be the single physical example of the new Bryde’s whale subspecies. “This is a really prized specimen.”