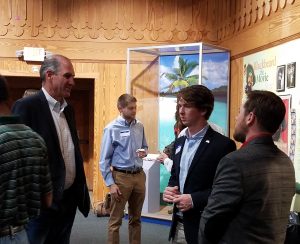 Town of Beaufort Mayor Rett Newton speaks with Shelton Scholars Sharpe Newton and Nick Bond during a reception welcoming the group to the town for a weekend of service.

A group of students recognized for outstanding performance and potential spent a weekend in Carteret County earlier this month putting the values-based leadership at the heart of their scholarship into practice.

The North Carolina State University students were named Shelton Scholars and awarded educational scholarships from the Shelton Leadership Center, founded by former Joint Chief of Staff Gen. Hugh Shelton. As part of the center’s mission “To inspire, educate, and develop values-based leaders committed to personal integrity, professional ethics, and selfless service,” five of the Shelton Scholars joined local leaders, as well as Gen. Shelton and his wife, for a weekend of service in Beaufort. The weekend started April 12 with a reception at the N.C. Maritime Museum welcoming the students to Carteret County.

The students’ service project, scheduled for the following day, was focused on the North River Community Center. It’s a site Ava Bryant is eager to see restored.

The Boys and Girls Club Unit Director has a vision of being able to bring the program to the students in their home community — and the project to clean the site is a first step in doing so.

“It’s a huge need,” said Bryant, who grew up in North River. “This is a great opportunity to shine a little bit of light in that community.”

The Shelton Scholars were to be on site undertaking such tasks as clearing debris, removing loose bricks and clearing brush alongside North River residents.

The Shelton Center is particularly meaningful for him, Eury explained, for two major reasons: His great nephew went through the Shelton summer program (“I saw what that meant to him”), and his respect for Gen. Shelton (“I just admire Gen. Shelton’s attitude: We’re here to serve other people”).