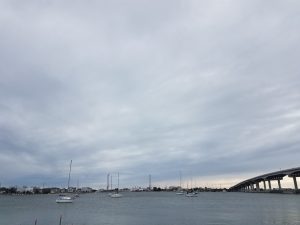 Construction on the new bridge over Gallants Channel displaced the program in 2014, moving its operations to Taylors Creek for the past five years. But with the bridge complete, Friends of the North Carolina Maritime Museum is working on improvements at the site to be able to host the summer program back at its original home.

“We are excited about moving the Junior Sailing Program back to Gallants Channel,” said Walt Wood, the president of the Friends of the North Carolina Maritime Museum.

It is, he explained, a better site for budding sailors.

“There is a significant tidal current in Taylors Creek, which makes it difficult for a child to learn to sail when more action is coming from the tide than from the wind in their sails,” he said. “It’s hard to sail when you’re sliding sideways with the tide.”

The Junior Sailing Program’s move is just one of the events, activities and updates expected over the course of 2019 for both the Friends group and the N.C. Maritime Museum Gallants Channel site. The Gallants Channel Project is at the heart of many of them.

The Maritime Heritage Foundation of North Carolina is working on updates and improvements along the Gallants Channel waterfront 100 feet east of where the waterfront facilities were located prior to the bridge construction. A 2016 CAMA permit authorizes piers, floating T Dock, boat ramp, gazebo, storage sheds, and five moorings; and the foundation has secured an encroachment agreement from NCDOT for access to the planned docks. Grants of $100,000 each from Duke Energy Water Resources Fund and Grady White will pay more than two-thirds of the expected $281,000 cost, with a fundraising party cohosted by two local couples bringing in significant additional funding designated for the Junior Sailing Program.

“The grants were critical, obviously; but we were not convinced that we were going to be able to move the program to Gallants Channel.” Wood said. “The success of the fundraising effort focused specifically on the move; and a party coordinated and hosted by Millie and Willis Warren and Kristy and Will Harvey was really the impetus to convince us that we could, in fact, move the program back to Gallants Channel as soon as this summer.”

In looking back at the recent fundraising success, Wood lamented the impending loss of the Maritime Heritage Foundation Campaign Coordinator Libby O’Malley. He said she was instrumental in helping the organization focus its fundraising processes and plans and that they are actively looking for her replacement.

And actively improving the site at the same time.

A three-quarter mile nature trail is also in development at the Gallants Channel site, with a 900-foot portion already completed as phase one. Another 700 feet has been cleared but is still awaiting the placement of wood chips and a small bridge. An observation platform will be added to this second portion of the trail, and the trail as a whole is awaiting signage that helps tell the story of the maritime forest’s flora and fauna, bottom lands, wetlands and intertidal zone.

But even as work continues on the site, planned events will showcase what has been accomplished and what is yet to come.

May 10 through 12: The first Crystal Coast Full and Half Booty Triathlon — featuring a 2.4-mile swim, 112-mile bike and 26.2-mile run for the full option — will be staged at the Gallants Channel site with the Friends of the Museum designated as one of the race’s benefactors. For information, visit crystalcoasttri.com.

May 17 and 18: The Beaufort Music Festival will feature two days of live music at Gallants Channel. The event includes food trucks, a family area with children’s activities, and a beer garden highlighting North Carolina craft brews. For information, visit beaufortmusicfestival.com.

June 1: The Beaufort Woman’s Club will host their Jazz under the Oaks fundraiser on the waterfront. For information, visit beaufortwomansclub.com.

June 8: Join the N.C. Maritime Museum and its Friends for the annual Maritime Day. The event features live music on the waterfront, children’s activities, a cornhole tournament, food vendors and free sailboat rides. An informal re­ception will also be held to recognize those who have purchased bricks over the past 15 years.

Oct. 12: Traditional Small Craft Association hosts the Fall in-the-Water Meet from 1 to 4 p.m. at the Gallants Channel docks. All small boats are welcome, and there will be a pig pickin’ and free boat rides for the public. Tickets and information are available at maritimefriends.org